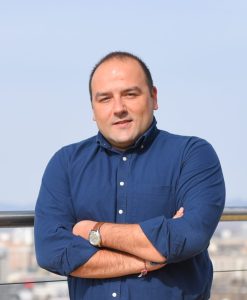 Dr. Kamen Kozarev obtained his PhD from Boston University in 2013, before working as a postdoctoral researcher at the Harvard-Smithsonian Center for Astrophysics. Currently, he is Associate Research Professor at the Institute of Astronomy and National Astronomical Observatory of the Bulgarian Academy of Sciences. His research is focused on the analyzing the early stages of solar eruptions, and modeling of the acceleration of charged energetic particles in solar coronal shock waves. He develops techniques for processing of multi-wavelength radio and ultraviolet telescopic observations of solar activity, Big Data and Machine Learning methods for heliospheric research. Dr. Kozarev leads several projects focused on data analysis and modeling of solar eruptions. In addition, he leads the development of a Bulgarian observing station of the pan-European LOFAR radio telescope

The next solar cycle 25 is ramping up, and already defying the expectations of a weak cycle. Together with the increase of solar activity, a number of space missions are entering preparatory phases, getting ready for launch, or already returning valuable new results. Parker Solar Probe and Solar Orbiter have already completed a number of orbits around the Sun, and their scientific findings about the inner heliosphere are defying existing theories of the solar wind and energetic particles. New space- and ground-based instruments are being developed for monitoring solar activity and space weather, in wavelengths ranging from X-rays to radio. In this talk, I will review some of the recent advances, missions, and modeling initiatives in space weather monitoring and forecasting. I will also take a look toward future efforts in the field.